David Finch reports on expansion to Mark Littleford's collection. ​A sprint car of dubious origin and a Ford A type hot rod in the making.
Just about to install the mountings on the roof of the Model A for grannies rocking chair., a la Clampetts. There are several bullet holes in the door and finished it will sure be a sight.
These will augment his Mark 2 Jaguar, Series  1 Landie and Fifties Chevy Pickup.
There’s also a couple of old lorries and tractors lurking about as well.

Alan Bateman and his Triumph Roadster in club literature 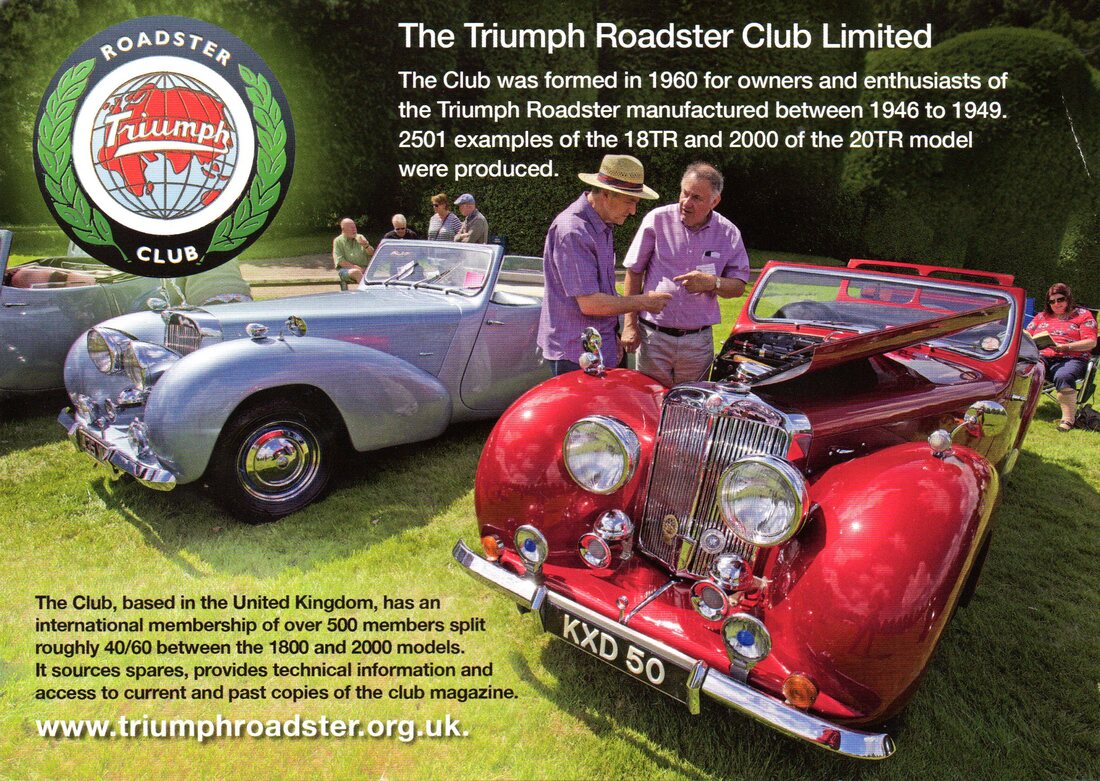 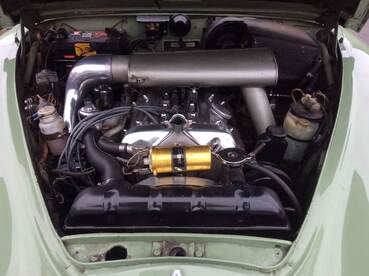 I now have my Jaguar back from the garage after it’s stay there of some 18 months (literally!). It went in for an MOT and new set of rubber hoses. After this there was a discovery of a small hole which led to nothing at all behind it (there should have been an inner sill, door post, floor, back panel and so on).​
Then we had a new radiator core, refurbished steering rack and power steering pump, new bump stops, constructed air scoop for oil radiator, rebuilt carbs x2, a multitude of new tubes, clips, washers, etc, etc.
All done in the garage owners own time during evenings and weekends and the 55 hours of work he logged have cost me nothing. I pay for parts only (and clean the loos, office, reception, garage workshop and all large machinery such as ramps every week). Of course, during Covid I’ve not been there so I owe him some brushing and wiping.
Whilst all this has been going on, I’ve redone the interior. All leather seats have been refurbished, carpets cleaned, new trim panels, new underlay and soundproofing having treated and repainted the floor first.
The only thing left to do is the woodwork and a few odds and ends. This has led to an agreed value of £19,000 for the last two years. I reckon the actual resale value of the car is probably £15-16K.
Looking forward to showing it off, and now time to start on my wife’s Jaguar XK8.
Best wishes
Simon and Liz Biggs

Kev Birch progresses with his Cortina

The Cortina has also moved on, it now has the suspension fitted, all except rear shock absorbers, still deciding what to go for,  and the engine is at Bromsgrove engines to be assessed to see what that will cost me. The gearbox has been inspected, but as it was rebuilt 12 months before the car was taken off the road, nothing untoward was found, but I have ordered front and rear oil seals as these had hardened. A coat of paint is all it required and will be ready to fit.

This is our “ Lockdown” project, fitting a reconditioned engine to the Wolseley. We started before Christmas and after a few set backs, such as a new Armature and brushes to the starter, also new corks in the Clutch plate the moment of truth had arrived at last. We have managed to fit the re-con engine into the Wolseley with a bit of persuasion, coaxing, shoving and pushing, and have started to fit other parts. We will keep you  informed of our progress

David Spruce Has Been Busy

​Happy New Year to you and all the fellow members of SPWCC.
You have some fascinating stories in the monthly newsletter so I thought I would write one of my own.
If too much I am sorry and if you don't use it it may make you smile .

For years I have been a collector of vintage motorcycles and back in March I stepped on the vintage car ownership.
Having convinced my lovely wife Val that a car would look lovely in our collection she agreed.
Little did she know I had been asked By the widow of the late Gordon Nutt if I knew anybody that might like to buy her Model T .
I showed Val the pictures I had taken and a few weeks later I had borrowed a trailer and was fetching it .
As I was planning on taking the car out all year behind our motorhome a couple of days later I had bought a car trailer of my own and it  was in Chesterfield ready for me to collect .
Then stopped in the path of Covid 19 I could not go and fetch the trailer I had paid for so it was thankfully put into safe storage by the seller for what turned out to be quite a few weeks.
This is when I realised I would have to spend some more money to look after it properly.
The First problem when I got the car home was my lovely 1925 Tudor Model T was too tall for the garage doors I had got fitted,  a very quick bodge and it was in but this had to be resolved very quickly.
Over the coming weeks I worked out how to lift the door by buying a lovely new set of taller doors and fitted them,
I could now get the car in and out easily except for the tight pace around it . This was now my next challenge to see if I could create more room around the car.
After weeks of measuring and drawing ideas it was about to start a planning application with Dudley MBC.
6 weeks later I now had building permission from Dudley MBC to extend my garage 7mtrs forward .
I had a couple of quotes which were coming in around £17.500 and nobody could start straight away .
Now as I had been on furlough from my job with Midlands Air Ambulance since the 23rd March and having what I called decent DIY skills I thought I could do most it myself.
But before this all started I needed to move the Model T for the duration of the work, so I decided to build a temporary shed at the side of the house and it was squeezed in with just a few inches to spare.
I sourced a local bricklayer who could make the brickwork look as good as the rest of the house and I had a good friend who does all kinds of gardening and building work who agreed to help me on a daily basis.
So the 1st week in November I had got all the materials I needed on order and due very soon, I now had to dig out the footing which was not as straightforward as expected due to a not so helpful building inspector but after 2 builders skips of dirt and rubble it was ready for the concrete.
The next week or so was all in the hands of the bricklayers .
Over the next 4 weeks I got the job complete and passed by the inspector ,
Thankfully I could now get the Model T out of its shed and now in its new home for Christmas .
So all in all my mate and I built the extension for £7500 .
So now I have my shiny new car trailer. I cannot tell my lovely wife that I have spent more money after buying the car than I did buying it in the first place.
Sadly a few days after I had finished the garage extension I had the news I was being made redundant as my job had dried up and was not going to come back for the foreseeable future.
Hope to see you all out and about in 2021 if we are allowed and invite all of you to both of my Vintage Rallies at Trimpley on Sunday 1st August and Arley on the 30th August assuming we will be allowed .
Best Wishes
David Spruce
ps
So a little lesson learnt is that I should think before I buy and maybe it is a good thing I don't always tell my  lovely wife the true cost of everything . ( I am sure she will guess anyway )