My Classic Car Journey
(or “how on earth did I get here?”) by Mark O’Neill 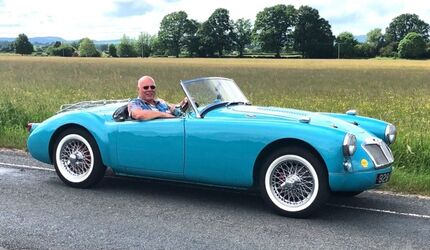 ​Mid 70’s. I’m a young lad with a choice. Pay to fix my failed car or DYI. No  garage or money so “Hobson’s Choice”! Then, through work I found company LEASE CARS !!! That was me sorted for the next 35 years.

So, 2 weeks later a battered 1956 Standard Super Ten is in my 1950’s falling down wooden garage. The car is scruffy & drives like a spinning top!! So started my new found, stumbled into, hobby of classic car rebuilding.

Roll forward again to 2016. Bertie (my Standard Ten had to have a name) had a new concrete, but cold, garage and had travelled around quite a bit, AND been displayed at the NEC classic car show.

I retired in 2014, was diagnosed with Prostate Cancer 2 months later, then the good lady was told of Breast Cancer 2 weeks later. (BUGGER!) After around 2 weeks of “WHY US???”, and a few choice words, we both thought ‘Sod it!”. I drew up plans for a new big garage and a sun room for Karen. We found an excellent builder. Told him what was about to happen and sat back to watch the building works while we had our variety of big C treatments. Most days we made tea for them, on not so good days they did it for us. After 5 months we had everything done and were feeling much more positive about the future.

I was spurred on to rescue a forlorn 1947 Morris 8SE (Maurice) from a cold barn in South Wales next. After 12 months Maurice was finished, so in came Luigi.

Luigi was a neglected 1991 Nissan Figaro from under trees in the Forest of Dean. Not so much classic as an unloved fashion accessory. However, a truly lovely automatic car to drive. When Bertie blew a gasket on the motorway to Cornwall I came back

and completed the 600mile round trip in Luigi. Having cleaned and serviced and sorted a few relatively mild issues Luigi had performed flawlessly. 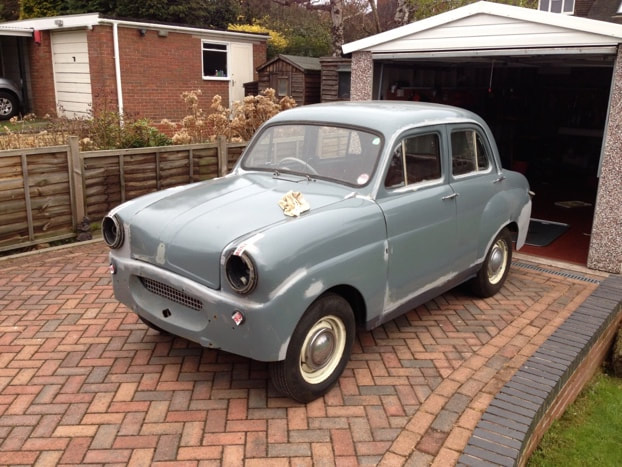 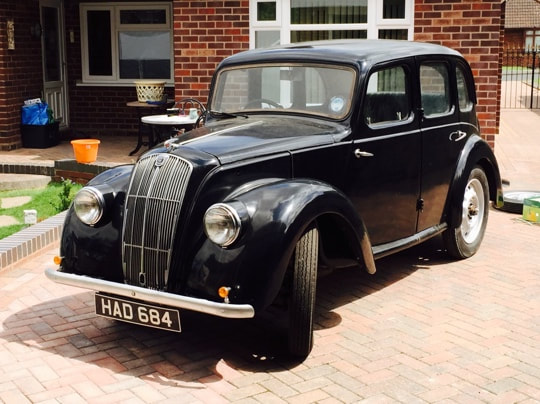 MarkAs I finished Maurice a chap turned up asking to buy Bertie for his private collection in the Peak District. He flatly refused to accept the car was not actually for sale. So off went Bertie!

Just to do something different in came Kooby-su (Reg “KO08YSU”). She was a neglected & filthy 1300 Daihatsu Copen. A pocket rocket if ever there was one. No more than a carrier bag space in the boot for weekends away, but she drove wonderfully. After cleaning and a full check over she really was a good car.

Maurice was finished so I looked for another project. A chap in Southampton took Maurice. Sadly it seems to have been “Sorned” ever since. So sad when it was prep’d for long distance driving, as with all my cars.

So, after a bit of searching I fell upon Monty. Another true barn find. Found near Southampton this 1939 Standard Flying Eight Open Tourer looked fabulous to me. No seats, floor, lights, (in fact no electrics at all), no dash, square tyres and only one dilapidated number plate plus (critically) no documentation at all! It turned out there were 13, and are (now) only 14, of this model known globally. It took me a while to research archives & find the original registration in May 1939 to a gent in Avon St, Evesham. Luckily, I now had sufficient history to re-register it with the original reg. After 12 months as I was building a hood frame for it COVID struck the UK.  The tiny Flying 8 was running perfectly, even the Bendix brakes were perfectly set up when ‘Roger’, a 1951 Singer Roadster, had joined Monty in the garage.

Roger looked fabulous. This, to date, was the most expensive classic I’d ever bought. It was also my first big mistake! The car was most definitely not what it was sold as. After a few weeks work & assessment, I ‘sold’ it back to the previous owner. He had admitted to knowingly sold me a complete “nail”. He took it back only after a threat to inform the Singer Owners Club (of which he was one of their ‘technical advisors’ ) of his deceitful sale. 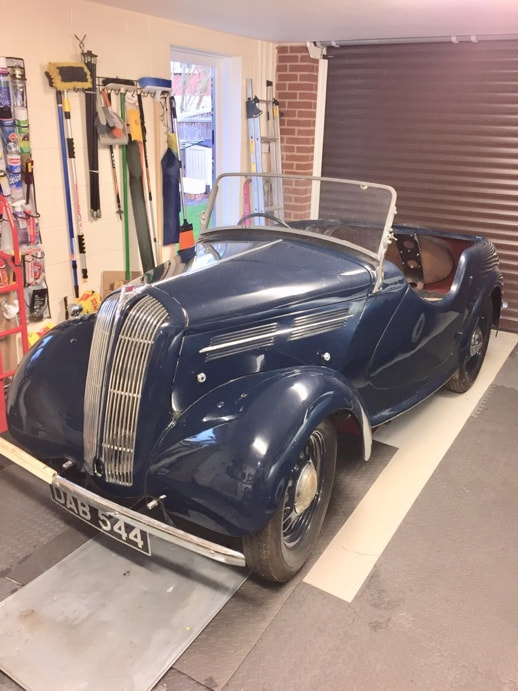 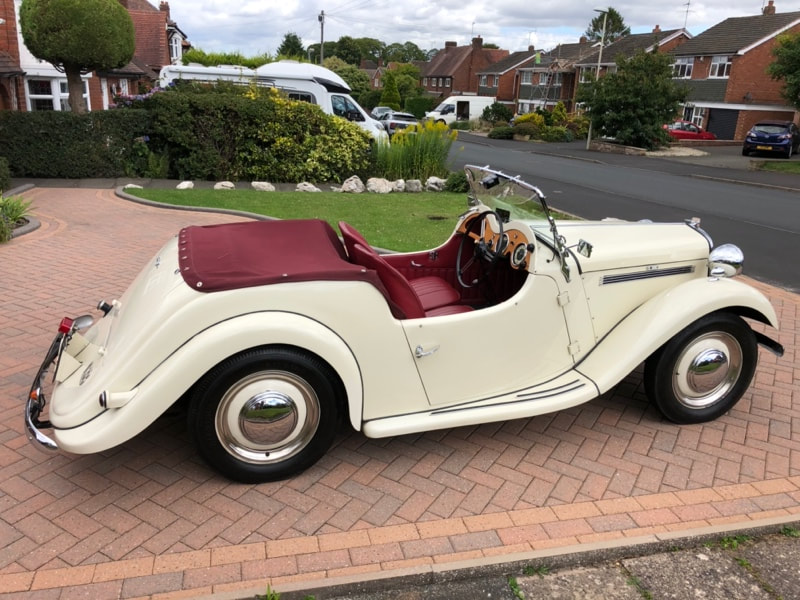 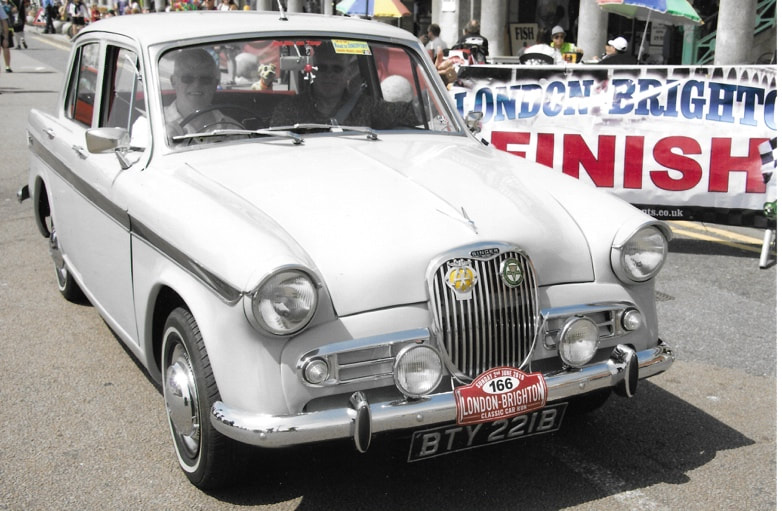 So, the space in the garage was filled again following a train ride to Sunderland from where I drove Betty home.
Betty was a 1964 Singer Gazelle MkV. In my view one of the best of the “Audax” body cars Rootes ever built. After a simple clutch replacement, a clean & tidy up, I set out on a North Wales 600 miler. What a car ! I did around 2500 miles in Betty. I rebuilt the engine, fitted a brake servo & new discs, Converted her to LEDs and completed the London to Brighton run . After a couple of years itchy fingers were going again. Betty was sold to a chap in Bude, Cornwall. I drove her down to him. Is there a pattern forming here ??

By now I’d replaced Koobysu with an MX5 for the boot space. We toured the south of the country for a few months. But it wasn’t right. I replaced the MX5 with a 1967 MGB Roadster that sounded a ‘nail’. However, I was sure I could fix it. I stripped the engine and removed the gearbox. I sent that bit to a ‘Dark Arts’ expert and it came back sorted. Engine compartment cleaned the bits went back in. Then it was interior renovation, under & external checks. What a faff to work on! However, it was so much better now. Also, while heavy, was nice and powerful to drive.

What shall I do now. I fancied something different. I love the shape of the Healey 3000 my mate has. But don’t want to copy him. So, I start looking at similar shapes. Then I find an MGA ad. A long chat on the phone and a few pennies later the car arrives. She is surf blue with white wheels and absolutely beautiful !

Rebuilt to tour across Europe by it’s owner Evette had been celebrated in the “Safety Fast” MG Owners Club magazine 7yrs previously. Then the owner’s wife said “I’m not going in that!”. So the car was used to get the groceries from the bottom to the top of a Welsh mountain, along a rough track, for 7 yrs. Never washed, cleaned or serviced, Just used. It took me nearly 9 months to strip it down and bring it back to life. Every inch was checked. But this truly was a labour of love. I never had a car that was deliberately modified before so I could and did do anything I fancied. Luckily for most the work was easy for me. Even totally refurbishing the interior from black to blue, including the previously leather covered dash.

Evette is now my 1956 dream car. A true “keeper” . It’s not going anywhere. My wife isn’t keen, but I absolutely love touring in it.

It was the middle of COVID and I had little to do. I saw an ad for a Nash Metropolitan coupe. For sale in Northern Ireland. It looked good. So guess what???

Well, it arrived and after a few weeks I got it MOT’d so I could have it registered. This really was a challenge. I dug around and traced the car back to the early 1990s, then back to 1980’s with photos, club records and a Metropolitan historian. DVLA didn’t want to know about the history. They seemed totally uninterested even letting me keep the original reg. Even after their own man inspected the car. So, after 12 months of wrangling I accepted an age-related plate. It’s a LOOOONnng convoluted story. Buy me a beer and I’ll bore you with it some time. 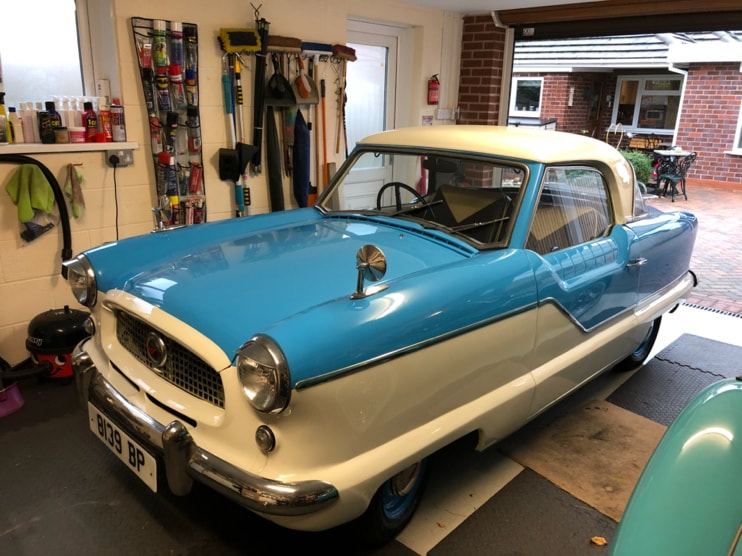 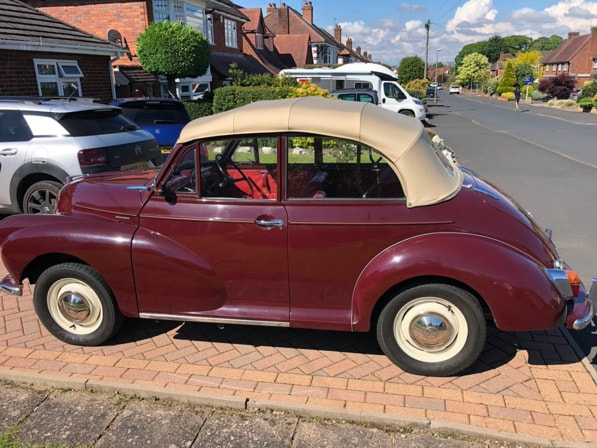 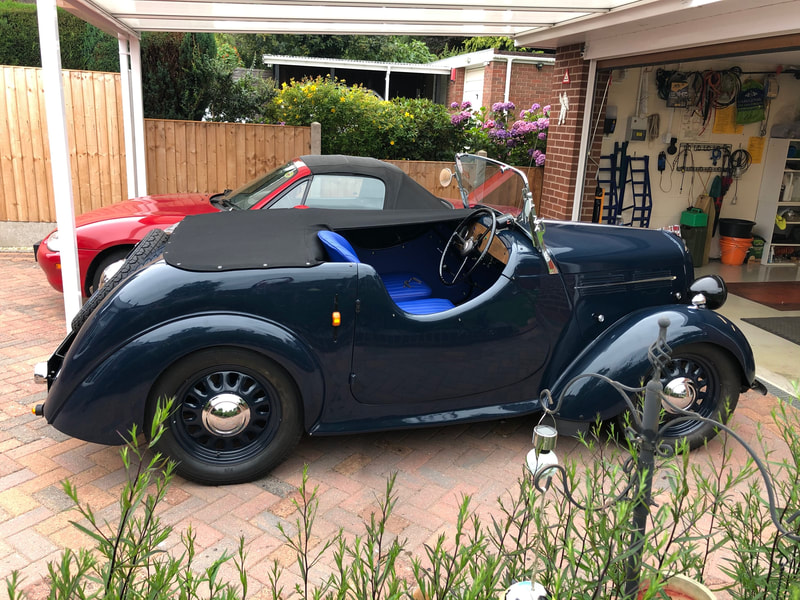 Around then a chap asked in the pub if I might be interested in a 1962 Moggy convertible fully rebodied 20 yrs ago. Everyone should have a moggy at some time. It should be a tradition. So along came Rose.  After a complete engine and mechanical overhaul and refurbishment inside and out she looked and drove wonderfully.

However, I had now built up too many cars so something had to give. Come winter I only had cover for 2 and there were now 5 classics here. The back drive looked like a used car lot.  Evette the MGA, Monty the Flying 8 Tourer, Mandy (the metropolitan) Lil’ red the MGB, Rose the Morris Convertible.  Some of them had to go before the winter set in. I targeted to reduce to 2 classics only.

My friend Dave came round to “See this little car we’ve heard about”. He introduced his uncle. Wow!  I’d not seen him since the early ‘70s when I was an apprentice Gas Fitter. They’d heard of the Flying 8 rebuild. It was even more of a surprise when, having had a little ride in Monty, Phil (my old colleague) asked to buy it! I had to advise it still needed the hood fabric and side panels, but did have a great tonneau. Not dissuaded Monty ended up being driven off down the road. Phil was grinning like a Cheshire cat. It’s the one car I’d buy back if I had the space.

Then a chap down the road turns up ‘out of the blue’ asking about the MGB Roadster. He’s passed the house several times, seen me out and about with it and rather fancied getting one. (What am I, a Used Car Salesman!!!!)  So, the MGB now resides 500 yards away with a neighbour. He absolutely loves it !

Then a man from Walsall contacts to buy the Metropolitan. He’s seen it on FaceBook posts. It’s like the one he had when he was a young man….  Away it goes. However, the man develops an serious illness and later donates the car to “The Great British Car Journey” in Derbyshire. Have a look when you visit!
Are you keeping up??

I now have the MGA and Moggy. The good lady’s still was not keen on ‘rag-tops’, so I needed a hard top for us all to go out in next yr. I found Madge, a 1957 MG Magnette ZB Varitone. The owner claimed to be a good mechanic. Where had I heard that before!!!.  So, its currently being resprayed and the whole car has been overhauled from front to back putting all the silly things right. (brakes, seat belts, dash, clocks, choke cable, carbs, master cylinder, LED conversion, electronic ignition). However, it does look like its going to be a really nice car.

Dave turns up again. He bought a TR7v8 for days out in the country, but his wife couldn’t get on with the car. Would I do a direct swap for the moggy?? So, I ended up driving a rather nice customised 3.9lt TR7v8 (TR8) which had been professionally converted by one of the 2 companies (P&P, Lincoln) that did TR7 conversions in the late 1990’s. It really was nice to drive. Even the good lady liked it. I started to think about keeping it as a ‘runabout’, then got an enquiry from a man in Albuquerque, New Mexico. After around 6 weeks ‘chatter’ it arrived in Galveston, Texas before setting off on a 900 mile cross country trip Albuquerque. Ah well. My intent was to sell it anyway. So now I’m down to my 2 car ‘target’. The amazing MGA and the impressive Magnette ZB Varitone.

I’m hoping to be ready for a great 2023 season.
Adventures to be continued…..